In previous articles at In diebus illis, we have traced the beginnings of Christianity in the Colony of New South Wales.  We noted the numbers of Catholics who were part of the First Fleet in 1788.  We read a heartfelt letter from an English Catholic priest, asking to be allowed to travel to Botany Bay to minister to Catholic convicts.  We also gained a vivid glimpse into the ministry of the first Christian Chaplain to the Colony, the Reverend Richard Johnson. 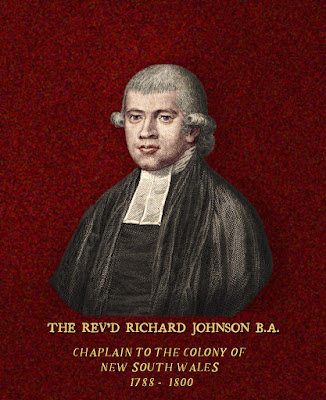 The purpose of this article is to give an overview of the events and personages of the Catholic community in the Colony of NSW from 1792 until 1834, the moment when Australia's first bishop, John Bede Polding OSB, was appointed.  For this overview, we use material from the Australian Dictionary of Biography and from some Catholic historians.   EN1   The contents of this post will be elaborated upon with forthcoming articles.  A further article will discuss the varying social conditions of Catholics during the first fifty years of the Colony.

As we have traced in previous articles, the spread of the Gospel was not a focus of the early Governors of the penal colony of New South Wales, still less, support for the practice of Catholicism.  There was no practical interest in religion per se, except as a means of improving the moral tone of the Colony - a struggle which was ongoing.  The absence of any formal Catholic community in Australia before the arrival of the two Catholic chaplains in 1820, also reflected the lack of legal rights afforded Catholics in Britain and the suspicion which British Authority had towards the blend of Irish Nationalism and Irish Catholicism.  Although the largest proportion of Catholic felons transported from Britain and Ireland from 1788 were Irish, not all were and there were also a small number of soldiers and officials of the Colony who were Catholic.  In 1792, a group of Catholics resident in Parramatta petitioned the Governor of NSW to make some provision for the religious sensibilities of Catholics; unsurprisingly, it was ignored, but this was the first moment when Catholics asserted their desire to practise their Religion.

Following the 1798 Uprising against British Rule in Wexford on the west coast of Ireland, many more Irish Catholics were transported to New South Wales and among them were three priests, Fathers James Harold, James Dixon, and Peter O'Neil.  All three were accused - unjustly - of complicity in that Uprising.  They have been known to Australian history as The Convict Priests. The fortunes of these these three in the Colony varied somewhat, and it was only Father Dixon who was was given official permission to offer Mass publicly in 1803. Rome conferred on him the title of Prefect Apostolic of New Holland, which sounded very grand, but had very little benefit to the Catholics of the Colony.

What seemed the beginnings of a Catholic community collapsed when discontented Irish convicts took up arms at Castle Hill (near Parramatta) in 1804.  Even though Father Dixon attempted to broker peace between the Castle Hill rebels and the Colonial Authority, Government toleration of Catholicism evaporated and the ministry of Father Dixon came to an official end.  All three priests had left the Colony by 1810, without any permissions granted for a further public ministry.  Seven bleak years ensued when there was no Catholic priest resident in the Colony, and yet, there were prominent Catholics - mainly former convicts - who worked quietly and successfully at building up a Catholic community.  We mention here William Davis and his wife Catherine (nee Miles), Jane Langley, James Dempsey, Michael Dwyer, James Sheedy, Michael Hayes, Edward Doyle, James Meehan, Catherine Fitzpatrick and her family.

The essential distrust of Irish Catholics held both by the British and successive New South Wales Colonial governors, was not eased by the short ministry in Sydney of the Irish priest, Jeremiah O'Flynn.   Father O’Flynn, formerly a Cistercian monk, arrived in Sydney in 1817 with Rome's approbation as Prefect Apostolic.  Always given to imprudence and impetuous behaviour, Father O'Flynn neglected to obtain prior approval from the British Government to enter and minister to Catholics in the Colony.  When he arrived - unannounced - he was not made welcome by the Governor, Lachlan Macquarie.  Father O'Flynn assured the Macquarie that authorisation for his appointment would be forthcoming from London, but without licence, he ministered in semi-secrecy to the Catholics of Sydney and surrounding districts.  He was eventually arrested and deported by Colonial Authorities to England.  He left behind a Catholic community disheartened by the loss of their pastor, but also a Divine present : the Reserved Sacrament in a pyx guarded reverently in the home of one of the pioneer Catholics of Sydney.

The notorious case of Father O'Flynn had other significant outcomes so far as the Catholic Community in the Colony was concerned. Upon his return to Britain, there was public distaste for the manner in which Fr O'Flynn had been treated, but perhaps more concern was expressed for the plight of Catholics in the far-off colony who had no chaplain.  Pressure brought to bear on the Government made them more disposed to providing Catholic chaplains, but they also cooperated with Catholic Authorities in Rome and London to facilitate this.  The British Government's continuing unease about Irish Catholicism led them to cooperate with the Vicar Apostolic of London in arranging for a chaplain or chaplains to be sent to NSW.

In 1818, Rome created an Apostolic Vicariate ( a form of Diocese) at the Cape of Good Hope and responsibility for the Catholics of far-off New South Wales was entrusted to the new Vicar-Apostolic, English Benedictine Father Edward Bede Slater. The new bishop's jurisdiction included Mauritius, Madagascar, the Cape of Good Hope, New Holland and Van Diemen's Land. Notwithstanding the British Government's intentions that English Catholic priests be sent to NSW, the incapacity of the English Benedictines to send priests to the outposts of this vast ecclesiastical territory caused Bishop Slater to seek chaplains in Ireland. Two Irish volunteers, Fathers John Joseph Therry and Philip Conolly, were accepted by Bishop Slater OSB and appointed by the British Government, each with a salary of £100. These two priests were to be the Bishop's missionaries in New Holland and Van Diemen's Land. They were responsible both to him and to the Colonial Government. The two chaplains arrived in Sydney in May 1820.

Embarking on their work with great enthusiasm, unfortunately it became clear very quickly that the two priests did not work well together.  In 1821, within months of the pair's arrival in Sydney, Father Connolly left the mainland to establish a mission in Van Diemen’s Land, specifically in Hobarton, where the small Catholic population was almost entirely convict.  Father Therry was left to minister to the needs of Catholics in all the existing and newly-settled areas of NSW.  Despite his immense energy and missionary zeal, he was barely equal to the demands upon him.  Although admirable for his perseverance in adverse circumstances, his hot-headedness and impatience with Authority led to his too-prominent association with groups opposed to Colonial policies.  A series of aggravating incidents led to the withdrawal of his Government salary in 1826, and a determined effort to expel him from the Colony.

Father Therry would not be moved, however, and continued his ministry whilst being supported by the Catholic Faithful, who held him in the highest esteem.  Partly because of their regard for him, the Catholic community did not warm greatly to the two Irish priests who replaced Fr Therry in succession as Chaplain from 1826.  These were  Father Daniel Power and then Father Christopher Vincent Dowling OP.  Notwithstanding these divisions, the priests continued a zealous ministry.  In 1821, the first Catholic school in Australia commenced in Parramatta and the foundation stone of the first Catholic Chapel - subsequently known as Saint Mary's - was laid by no less a personage than Governor Macquarie.

From the late 1820s, as the number of Irish Catholics in the colony continued to rise (though mainly convicts and working class people), a trickle of educated and politically-significant Irishmen migrated to Sydney, notably Roger Therry and John Hubert Plunkett, both of whom were appointed to senior legal offices in the Colony.  Father John McEncroe accompanied Mr Plunkett as an additional official chaplain (1832).  Father McEncroe, who had previously spent some years working in the American colonies, managed what his two predecessors (Fathers Power and Dowling OP) had failed to do, namely to maintain a good working relationship with Father Therry.

In the same year, 1832, a new Vicar Apostolic at the Cape of Good Hope appointed Father William Ullathorne OSB (a monk of Downside Monastery in England) as his Vicar-General in the colony of New South Wales.  This appointment was ratified by the British Government.  Although very young, when Father Ullathorne arrived in Sydney in 1833, he tactfully and capably put the affairs of the Church in order with the assistance of Father McEncroe and sometimes grudging cooperation from Father Therry.  But Father Ullathorne soon saw the infant Church in Australia needed its own resident bishop, and wrote to Rome and England accordingly.  After some consideration and negotiation, the Holy See and the British Government reached agreement and Dom John Bede Polding, another Benedictine monk of Downside Monastery, was appointed the Vicar Apostolic of New Holland and Van Diemen's Land in 1834. 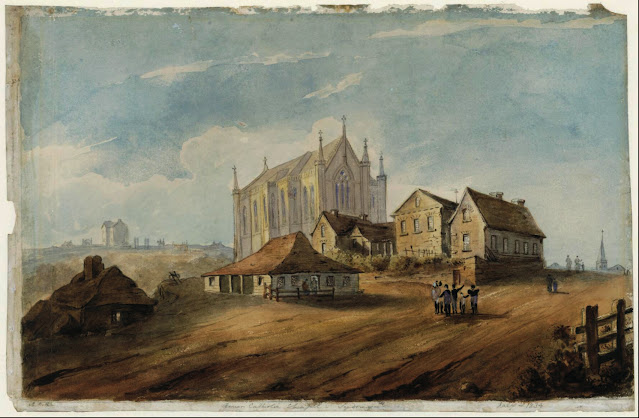 Standing on what is now Saint Mary's Road, an artist painted the watercolour shewn above in July 1834, looking towards what we know as the site of the ANZAC Memorial in the southern precinct of Hyde Park.  This watercolour is part of the collection of the National Library of Australia.

In the centre of this painting is Saint Mary's Catholic Chapel, whose exterior walls of light-coloured stone had only been completed in the previous year.  A year later, it would become the Cathedral Church of the newly-arrived Bishop Polding.  The proportions of Saint Mary's are not quite accurately portrayed in this painting : it was of a much more "squat" appearance.

The focus of these paintings is a collection of buildings which were constructed in stages during the 1820s and included a temporary chapel (under the patronage of Saint Joseph), a schoolroom and the residence for the various pioneering priests.
AMDG
ENDNOTE
EN1  Biographical notes prepared in 1967 by the late Mr Bede Nairn for The Australian Dictionary of Biography were used as the skeleton for this article.