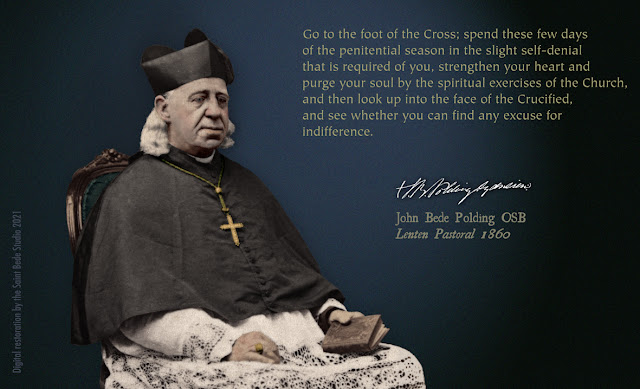 If there is one thing more obvious than another in the vocation to which the Almighty has called us Christians, it is its absolute claim over all that man has and is - the entireness of the change by which the Christian has become a new creature, and which old things are passed away, and all things are become new.  Hence, indifference is amongst its deadliest enemies or, rather, it is a foe which bears within itself the concentrated mischief of all others.  Open sin degrades and makes miserable the sinner, but it leaves his with his eyes in some degree open, if it be only to see his own nakedness. ...

The first and the greatest of all commandments – the first of the two on which hang all the law and Prophets, runs thus: “You shall love the Lord your God with your whole heart, and with your whole soul, and with your whole mind.”  Recall to memory the terms which are used by the inspired writers of the New Testament, in order to describe true nature of the life which is to be led by the disciples of Christ : it is a pilgrimage, a race, warfare demanding watchfulness, and endurance, and stout heartedness.  The merchant of our blessed Lord’s parable, having found the one pearl of great price, went his way and sold all that he had, bought it.  If Christian men would be indeed followers of Him whose name they bear, they are warned of the cost as earnestly as they are lovingly invited; they are to take their Cross daily; they are to stand prepared to give up all that is dearest in human life, and that life itself also, when their Master’s call is heard.  The same voice which is ever crying throughout the world “Come to me all you that labour and are burdened, and I will refresh you,” utters also the warning exhortation “You cannot serve God and Mammon” : the same Good Shepherd who gathers the lambs in his arms, and seeks out with so loving a perseverance the wandering sheep, has Himself told us of the day when He will say to those who - at the appointed hour, shall have no oil in their lamps -  “I know you not.”

There is a fearful error, Dearly Beloved, against which no warnings of mine can be too solemn and importunate.  It is the error of supposing the Christian life to be a thing of negatives, as if all you had to hope and strive for were the avoiding of flagrant transgression of the penal laws of God.  What an unworthy distortion of Christian thought, and yet how many seem to adopt and live in this distortion !  You are “to cease to do evil” certainly, but it is that you may “learn to do well” and these two things are as inseparable in practice as they are in precept.  What is the main character of the spirit taught by the Church and by the Holy Scriptures?  Is it not the filial temper of love and self-sacrifice, and devout imitation of our Lord, in very contra-distinction to the grudging, reluctant, sluggish, lukewarm temper of the slave who fulfils an unloved service under constraint and fear of punishment? Think too, again, of that revelation which our Saviour has graciously made to us of the manner in which the last judgement will be conducted.  How much it declares, and how much it implies…. The blessed are blessed for what they have done; the cursed are cursed for what they have left undone.  Most merciful and dread lesson!  Let us take it to heart.

What we have said, Dearly Beloved, and what we have suggested, is enough to guide your thoughts in the direction in which we would in this season have you employ your self-examination.  What is the remedy … if you discover that practical indifference has fastened upon yourselves, or upon any you love and care for?  This one thing; recurrence to one of the first statements of your catechism - man was created in order to know God and serve Him in this world, and to be happy with Him in the next.  Enter into the depths of this truth and when you are in some tolerable measure permeated by a sense of what it implies, then look at this world, at its utmost good and evil in such a light.  Or listen to these words of eternal wisdom: “What shall it profit a man if he gains the whole world and lose his own soul?”

Better still to go to the foot of the Cross; spend these few days of the penitential season in the slight self-denial that is required of you, strengthen your heart and purge your soul by the spiritual exercises of the Church, and then look up into the face of the Crucified, and see whether you can find any excuse for indifference.  Never did Christian man, as he stood upon Calvary and contemplated its spectacle, think of half measures.  Truly and wholly, in the church and in the world, in prosperity and adversity, “I am yours and yours only, My Lord and my God.”  May this be in all your hearts; and make the grace of our Lord Jesus Christ, and the charity of God, and the communion of the Holy Spirit be with you all.  Amen.

Excerpts from Archbishop Polding's Pastoral Letter for 1860 as contained in the anthology The Eye of Faith.

The Eye of Faith was printed by the Lowden Publishing Co., Kilmore Victoria in 1977.  The editors were Gregory Haines, Sister Mary Gregory Foster and Frank Brophy.  Special contribution to the volume were made by Professor Timothy Suttor and James Cardinal Freeman.