The recurrence of the Holy Season of Lent requires us, your Chief Pastor, to invite you to comply with the duties it imposes, and to enter upon their accomplishment.  It is a time of penance and of mortification, of prayer, and of devout meditation, of retirement, and of recollection. These are duties of which the carnal-minded sensual man forms no idea, at which the unwise and thoughtless scoff.  For alas! We live among those in whose eyes mortification seems an extravagance; penance, the illusion of weak minds, and the holy law of the forty days fast - a superannuated and unreasonable observance, unworthy of these days of enlightenment and rational morality.  We have - with grief we declare it - nominally among us those to whom meats, prohibited by the law of abstinence, appear more agreeable by the very reason that they are prohibited; pretended philosophers, in whose estimation religion is a mere convenience, whose laws may, and ought, to yield to human wants and weaknesses; who would have merit without effort, virtue without sacrifice, repentance without amendment, amendment without penitential deeds; who, with a morality as loose as their faith, dispense with the obligations of the one with the same facility that they swerve in practice from the principles of the other.

To the miserable inconsistency of these false Christians we cannot bend, and in proportion to the scandal each their maxims and conduct spread amongst the faithful, must we earnestly raise our voice and proclaim the eternal Gospel of which the Beloved Disciple   (1)  speaks so emphatically.  That Gospel, which, as a condition of salvation, declares alike the necessity of penance, and the necessity of faith; necessity against which no plea of custom, no reason of circumstance can prescribe.  We must announce to you in season, and out of season, the Gospel, in the spirit of which we must continually renew the spirit of our mind - eternal in its opposition to our passions, to the deceitful pleasures of the world and its senseless joys; eternal in its duration.  For … the Gospel which requires the entire submission of the understanding and will, knows neither the vicissitudes nor the variations of time: for it is not less unchangeable than God himself, being none other than His revealed Word, the Sovereign Truth.  One God, one Lord, one Faith, one Baptism. 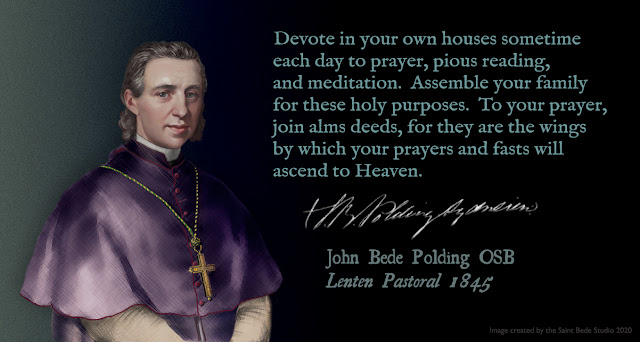 And let this be deeply impressed on your minds - there is not a truth more evident than the maxim of the Gospel which declared, that where sin has been committed, there must be penance.  This is the dictate of reason as well as of revelation; it is proclaimed in the wants of our nature, it is consecrated by the belief of every age, and by the conscience every people!

And sin has been committed, and is committed amongst us. We acknowledge with gratitude, the vast and consoling change which the exercise of the Holy Jubilee has wrought.  (2)  Yet alas! how many refused the proffered graces; how many have fallen back from their good resolutions.  Of some, may it not even be said, that their latter state is worse than their former?   In our congregations, still are to be found the hardened and impenitent, alike insensible of the mercies they despise and of the terrors of Eternal Justice they defy.   Fathers of families, or persons otherwise of influence, whose conduct as good Christians, attentive to their religious duties, would be two hundred times as edifying as it is now scandalous, a source of salvation, not of reprobation.  Cease for one short moment, cease from pursuing in breathless haste, those means of enriching yourselves, emphatically called, the employments of life.  (3)

When you have recollected your scattered thoughts, ask yourselves, if for such pursuits as these you were created; what have you done, what are you doing in reference to the great end of your creation, redemption and sanctification, salvation of your immortal souls?   Retrace your past years. Well would it be for you could you conclude that they had only been passed in a manner utterly unavailable to your eternal welfare.  Conscience makes a difference report; sin has been added to sin .... Sins of impurity, sins of drunkenness, sins of injustice; sins on the counter, seems behind it; sins in your dealings, sins in your accounts, the curse of the parent on the child, producing its sad fruits in disobedience, dissipation and ruin; bad example in the master and mistress, living in habitual violation of the commandments of God, and of his Church, attended by dishonesty, disrespect, and carelessness in the domestics; where these and many other vices prevail, shall it be supposed that repentance, with its salutary mortification, may be dispensed with?

Be wise unto salvation; receive the warning which the Lord has sent you.  Enter on this holy time of penance with proper dispositions.  Let the mitigation of its ancient rigours induce you to be more exact in fulfilling that part which is still retained.

For this purpose, to your fasts and abstinence join prayer and alms deeds. Prayer is good with fasting and alms deeds.  Wherefore, each day hear Mass, if in your power.  Attend the public prayers and instructions of the Church.  If you cannot enjoy this advantage, devote in your own houses sometime each day to prayer, pious reading, and meditation.  Assemble your family for these holy purposes; our Saviour has promised to be where his disciples may be gathered together in his name.  To your prayer, join alms deeds, for they are the wings by which your prayers and fasts will ascend to Heaven.

Finally, Brethren, hasten to purify your consciences from all sin, in the sacred tribunal of Confession. Do not delay. Many fall from their good resolutions by delay in carrying them into effect.  So shall you be prepared to meditate more devoutly and to form yourselves to a plan of life which will be followed afterwards : a life of purity, and of holiness, of self-denial and detachment from the world, of recollection and prayer; which was in primitive times and ought to be now, the ordinary life of the Christian.

The grace of our Lord Jesus Christ, the love of the Father and the sanctifying influence of the Holy Spirit be with you all.  Amen.

The above are excerpts from Bishop John Bede Polding's Pastoral Letter for Lent 1845 as contained in the anthology The Eye of Faith.

1. Saint John is commonly referred to as "the beloved disciple".

2. It is uncertain which Jubilee the Archbishop is referring to. The previous Universal Jubilee year was  1825, long before the time of this letter and before his arrival in Australia.

3. With the words "employments of life" the Archbishop is not referring to professions or trades, but more likely leisurely activities "pastimes".

It is easy enough to read the letter above as belonging to the religion of a long-gone age and full of negativity.  These, however, are not the writings of a man who considered himself morally superior, thundering at those who have fallen by the way.  These Pastoral letters were intended to be read out in all the churches of the Archdiocese. Archbishop Polding uses strong language to get the attention of the faithful - they are not intended to be cosy fireside chats.  It was the Archbishop's longing and lifelong mission to make all those in his care better Christians.  His Lenten focus on sin and conversion ought to be understood in that light. This was a bishop who travelled around Australia - often on horseback - to bring the Gospel to the Faithful.  This was a bishop who spent hours in the Confessional wherever he went, reconciling the Fallen to God.  He was a man who understood the human condition and had immense compassion.  Only a man of profound Faith, compassion and a burning desire to bring souls to Christ could expect anyone to take notice of the dramatic language of this 1845 Pastoral Letter for Lent.

The Eye of Faith was printed by the Lowden Publishing Co., Kilmore Victoria in 1977.  The editors were Gregory Haines, Sister Mary Gregory Foster and Frank Brophy.  Special contribution to the volume were made by Professor Timothy Suttor and James Cardinal Freeman.
AMDG
at 2/25/2021 12:19:00 PM