John Bede of the Holy Order of S' Benedict, Archbishop-Assistant to the Pontifical Throne, Prelate to the Household of His Holiness &c &c. By the Grace of God and the Apostolic See, Archbishop of Sydney and Vicar Apostolic of New Holland, to the Faithful of the Archdiocese and Vicariate, Clergy and Laity : Grace and Blessing. 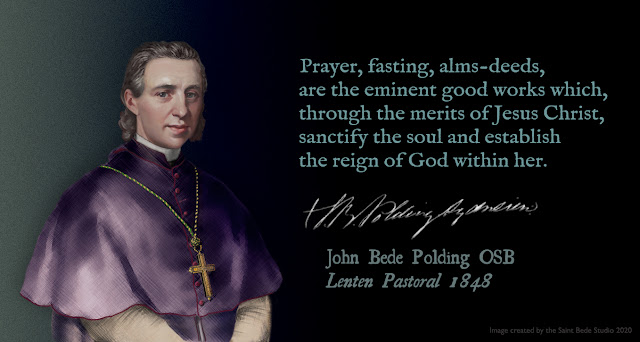 In the course of the year, the wise and tender cares of the Church for the spiritual welfare of her children is made manifest by the institution of various seasons; of some devoted to penitential exercises, and of others to thankfulness and joy.  Of the former, the period of Lent may be considered the principal. It becomes us to enter into the spirit of this holy time, in order that our souls may duly profit by it.

And what is that spirit? Too frequently the time of Lent is deemed merely a period during which abstinence from certain kinds of food, and a restriction over the cravings of the sensual appetite are required. Under this impression, its observance sinks down into a mere outward formality, by which the soul is not in the least amended. But, Beloved Children in Jesus Christ, the Church aims at something more than this; she intends Lent to be a season of retirement, of self-examination, in order that the soul - when she has by these means come to a knowledge of her state - may employ herself in subduing her enemies, in rectifying her inclinations, her powers, and in bringing the entire man, by salutary restraint and mortification, under subjection to God. Hence, not only is fasting ordained; prayer and alms-deeds according to our means must be used. These three : prayer, fasting, alms-deeds, are the eminent good works, which through the merits of Jesus Christ, sanctify the soul and establish the reign of God within her.

Prayer is absolutely necessary for salvation : so requisite, indeed, that no other means whatever can supply the graces which are attached to it. Accordingly, no duty is more strongly insisted on in Holy Writ; to none is a reward more distinctly promised. Pray always; watch and pray, lest ye enter into temptation; Ask, and you shall receive, that your joy may be full; Knock, and it shall be opened. Thus, whilst prayer is assured of its recompense, no gift from God is promised unless it be asked for: the door will not be opened unless we supplicate for the favour.  Hence, prayer is one of the principal duties of the Christian. And what is prayer? It is, observes the Catechism, * a raising of the heart to God, whereby we ask to receive all good, and to be delivered from all evil. Let our prayer be from the heart, and it will never fail to obtain success, so far as may be conducive to our salvation.

Wherefore, Beloved, we exhort you to continued, earnest prayer. Never omit to offer your supplications each morning and evening; before and after your meals say a prayer; follow the custom of the first Christians, and acknowledge the bounty of Him who opens his hand and fills his creatures with benediction. Be assiduous in reciting the form of prayer to commemorate the goodness of our Saviour in becoming man for our sakes, known by the name of the Angelus. Assist at the Sacrifice of the Altar, not on Sundays and holy days only, but even each day, if your circumstances will permit. Habituate yourselves to walk in the Divine presence, and from time to time in the course of the day, to raise your thoughts to God by some prayer. Thus will you accomplish the precept of praying always.

And for whom are we to pray? The love of self imperceptibly extends its influence even over our devotional exercises. We pray for ourselves, for our families, and we conclude that we have discharged our duty.  It is not so, Beloved.  Members of one holy Church, which unites in one all her children, we are bound to pray for her welfare, for the welfare of the Head of the Church, of our own [bishop], pastor, and other superiors; we are bound to pray for all ranks and conditions of life, that to all may be given according to their respective wants. And even as we cannot in Christian charity neglect to relieve the bodily wants of those in distress, so that same Christian charity requires that by humble, continued, earnest supplication, we endeavour to obtain the grace of repentance for all in the dreadful guilt of mortal sin. Wherefore, we strongly exhort you … [to pray for] … the grace of conversion for those who still sit in darkness and under the shadow of death. We entreat you to remember the duty you owe to your own country and people.

Excerpts from Archbishop John Bede Polding's Pastoral Letter for 1848 and 1849 as contained in the anthology The Eye of Faith.


NOTES
The Eye of Faith was printed by the Lowden Publishing Co., Kilmore Victoria in 1977.  The editors were Gregory Haines, Sister Mary Gregory Foster and Frank Brophy.  Special contribution to the volume were made by Professor Timothy Suttor and James Cardinal Freeman.