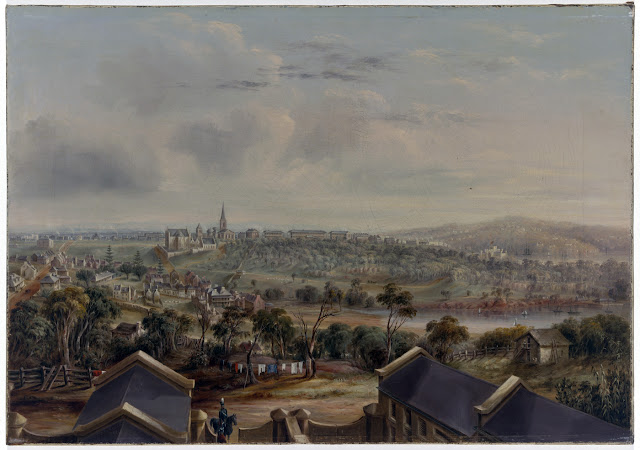 This lovely watercolour of the city of Sydney in 1849 was painted by the colonial artist George Edwards Peacock from Woolloomooloo approximately on the site of Macleay Street.

On the left, we find William Street running west towards Hyde Park.  To the left of the centre of the painting is depicted old Saint Mary's Cathedral, shewing its apse rather than principal facade.  Adjoining the northern transept of the Cathedral is the Chapel of Saint Felician, built for the private use of the Benedictine Community.  Further to the right of old Saint Mary's is found the building now known as the Chapter House, and beyond this, the campanile designed by AWN Pugin and built to house Sydney's first peel of bells.  Along the skyline can be made out the Hyde Park barracks, as well as those buildings running along Macquarie Street which comprise the Mint Building, the Sydney Hospital and Houses of Parliament.  The spire of Saint James' Anglican church can also be clearly seen.

Dense bush is illustrated in that area which is now the Domain and the Botanical Gardens.

An enlarged section of Peacock's painting is also included here, which demonstrates the detail in which the artist captured the city buildings.