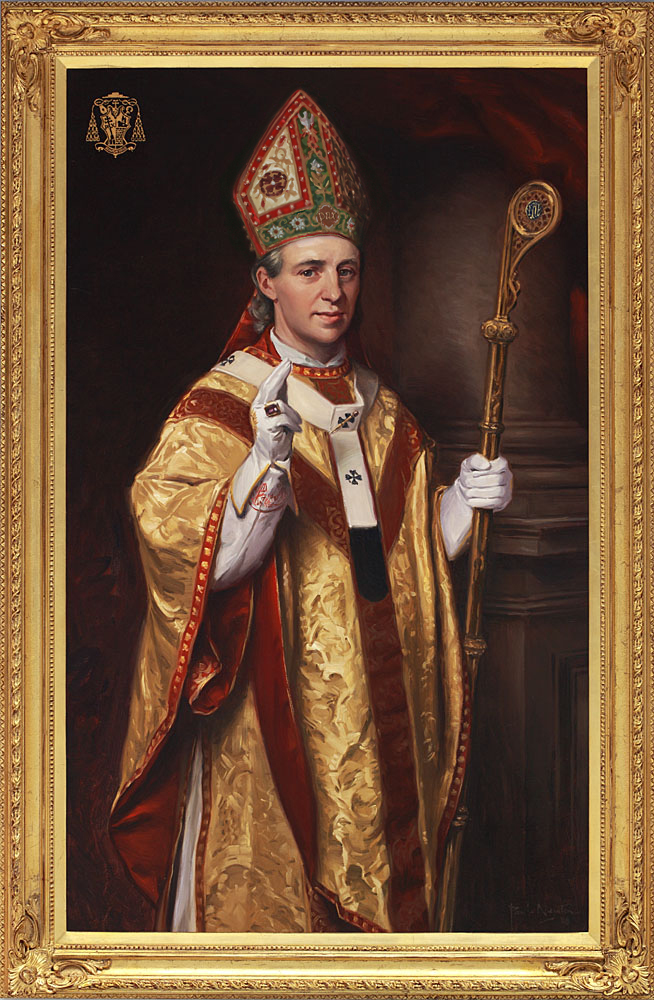 This lovely portrait of Archbishop Polding is housed in Saint Mary's Cathedral Presbytery, Sydney.  It was painted by Sydney artist Paul Newton as a commission to coincide with the visit of Pope Benedict to Sydney for World Youth Day in 2008.

The portrait depicts the Archbishop vested in Pontifical Mass vestments and as he would have appeared in 1842, the year he was created Metropolitan Archbishop of Sydney.  The face of the Archbishop is based on a sketch of him made in Rome in 1842.  The vestments depicted in the portrait are a set made by The Saint Bede Studio from silk damask and ornamented with Puginesque braid.

In the preparation of this portrait, the artist consulted the Saint Bede Studio in order to depict the vesture of the Archbishop as accurately as possible.

The Archbishop is wearing a linen albe, ornamented with embroideries, and over this he wears the Episcopal dalmatic and the chasuble.  The white woollen pallium - distinctive of a Metropolitan Archbishop - is also depicted, together with the ornamented Episcopal gloves.

Lastly, the crosier - or bishop's staff - is based on the crosier owned by the first Bishop of Hobarton (Tasmania), +Robert William Willson, which was designed for him by the famed luminary of the Gothic Revival AWN Pugin.