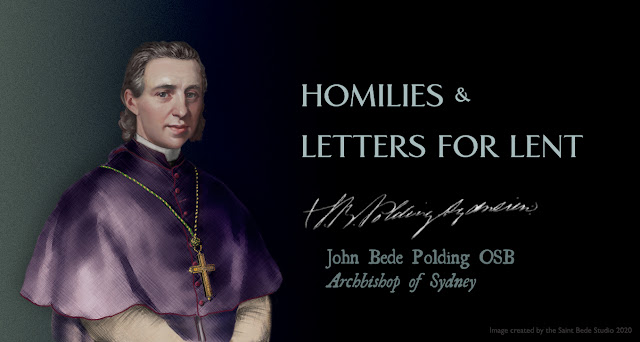 In 1842, during the visit to Rome when he was appointed Archbishop of Sydney, John Bede Polding was accorded the rare distinction by Pope Gregory XV, of being made a Bishop-Assistant at the Pontifical Throne and a Count of the Papal Court. As a bishop-assistant, Archbishop Polding was required to wear particular vesture whilst resident in Rome (but only whilst in Rome); regardless of the fact that he usually wore the black choir dress of Benedictine bishops, the vesture of members of the Papal Chapel was to be purple in colour.

During this particular visit to Rome, a pen-and-ink portrait of Archbishop Polding was prepared by a local artist Signor Fidanza and depicts him wearing the vesture of a prelate of the Papal Chapel.  This portrait depicts the Archbishop as young and optimistic in appearance and with a full head of hair!  At the time, he was 47 years of age.  The illustration accompanying this post is a digital enhancement of Fidanza's 1842 portrait.

The illustration includes a reproduction of Archbishop Polding's signature : + J.B. Polding Sydnein. being an abbreviation of the Latin Sydneyensis, indicating his office of Archbishop of Sydney.


NOTES:
1.  The shade of Roman Purple which is now familiar for the colour of the vesture of bishops is similar to the colour fuchsia. This colour, however, was only stipulated by the Holy See in 1930s as the particular shade of purple approved to be worn by bishops and other prelates. In centuries previous, various shades of the colour violaceus were worn by Catholic bishops, some being more blue in tone than red. All these varieties were considered acceptable. But the brighter purple or fuchsia now familiar to us was hardly known before the 20th century.  Archbishop Polding is shewn in this illustration in choir dress which is more violet in colour.