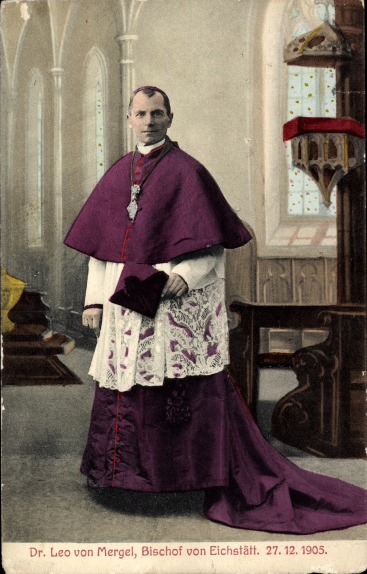 What might be described as the "formal wear" of prelates of the Catholic Church consists of a cassock with a sash around the waist, both covered by a special form of surplice called a rochet.  Over these two robes is worn an elbow-length cape called a mozzetta. Along with many other things in the years following the Second Vatican Council, the formal dress of prelates of the Catholic Church was simplified and made more uniform (so to speak).

In the centuries before 1968, however, the formal or choir dress of prelates was more elaborate and varied greatly. A comprehensive description of this is not the subject of this post, except as it applies directly to our Australian Catholic history.  In particular, we wish to describe the choir dress of Benedictine monks who were made bishops. In the Archdiocese of Sydney, there were three such bishops : John Bede Polding OSB; Charles Henry Davis OSB and Roger Bede Vaughan OSB.

The adjacent image depicts a German bishop of the early 20th century dressed in formal or choir dress. Although bishops in our age wear very similar robes, it will be immediately noticed that the colour of this bishop's robes is a rather dark purple, rather than the brighter purple now universally seen, which is referred to as Roman purple.

Those Benedictine monks who were consecrated bishops did not, however, wear robes of this purple colour, but rather black in colour.  They wore a black cassock with black buttons and a black sash, a black mozzetta with black buttons, a black zucchetto (or skull cap) and used a black biretta.  Archbishops Polding and Vaughan both wore this black choir dress, as did Bishop Davis. In the case of Archbishop Polding, however, the colour of the choir dress he used was not quite so straightforward.


In 1842, during the visit to Rome when he was appointed Archbishop of Sydney, John Bede Polding was accorded the rare distinction by Pope Gregory XV, of being made a Bishop-Assistant at the Pontifical Throne and a Count of the Papal Court. Although purely ceremonial in character, this appointment required Archbishop Polding to adopt the vesture of the members of the Papal Chapel. Over his choir cassock and rochet, he was required to wear the mantaletta (a sleeveless cloak whose use was largely discontinued for bishops from 1968) and over this, the usual mozzetta of greater prelates. There are two important points here, namely that as a bishop-assistant, Archbishop Polding was required to wear this vesture whilst living in Rome (but only whilst living in Rome); and that regardless of the fact he usually wore the black choir dress of Benedictine bishops, this vesture was to be Roman purple in colour.

At least three photographs exist of Archbishop Polding wearing the vesture described above, which points to those photographs being taken during one of his visits to Rome. One of those photographs is shewn above.  This same photograph was subsequently used to make a lithograph of Archbishop Polding widely distributed during his life and after his death. In turn, the lithograph was used to prepare a painting of him (not painted as a life-study), which is kept at the Convent of the Sisters of the Good Samaritan, Glebe (Sydney).


Here we may draw the reader's attention to three portraits of Archbishop Polding known to have been painted during his life and most likely from "sittings".  One of these portraits was painted in 1835, before Polding left Downside Abbey (UK) for Australia. The other two portraits were painted in Sydney in the early 1860s and are kept at the University of Sydney and the Sancta Sophia College, Glebe, respectively.  Each of these portraits shew the Archbishop wearing the black choir dress of a Benedictine bishop. Two of the portraits depict the Archbishop wearing another item of a bishop's choir dress, used only on the most solemn occasions by the bishop of a Diocese.  This is the cappa magna : the great cloak.

Each of these three portraits (and some others which have come to our attention) will be the subject of individual posts on this blog, when we have obtained good-quality images of them.


NOTES:
1.  The shade of Roman Purple which is now familiar
for the colour of the vesture of bishops is similar to the colour fuchsia. This colour, however, was only stipulated by the Holy See in 1930s as the particular shade of purple approved to be worn by bishops and other prelates. In centuries previous, various shades of the colour violaceus were worn by Catholic bishops, some being more blue in tone than red. All these varieties were considered acceptable. But the brighter purple or fuchsia now familiar to us was hardly known before the 20th century.

2.  A zucchetto or skull-cap which belonged to Archbishop Vaughan was preserved in the Collections of Saint Patrick's College, Manly.  The colour of this zucchetto was neither black, nor Roman purple, but violet.
at 10/20/2019 01:16:00 AM