In an houre of need 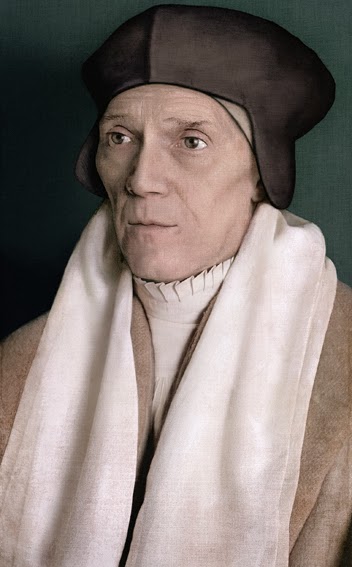 Thanks to Father Finigan we found this beautiful prayer of Saint John Fisher, dating from the year 1508, which he uttered during a Sermon. It is a prayer for the appointment to the Church of good bishops. Unfortunately the prayer was not answered as fully as he might have hoped. John Fisher, Bishop of Rochester since 1504, was the only Bishop in Catholic England to refuse to assent to the Act of Supremacy, the supreme arrogation of the vile despot Henry VIII (Tudor), severing England from Communion with the Roman Church. For such a refusal, Fisher was put to death by the tyrant in June 1535.  Pope Paul III had made him a Cardinal shortly before his death. Pope Pius XI canonised him four hundred years later (together with Sir Thomas More).

The portrait accompanying this post is described here . Based on Holbein's famous drawing, this portrait might easily be a photograph taken yesterday, so lifelike is it.

Lord, according to Your promise that the Gospel should be preached throughout the whole world, raise up men fit for such work. The Apostles were but soft and yielding clay till they were baked hard by the fire of the Holy Ghost.

So, good Lord, do now in like manner again with Thy Church militant; change and make the soft and slippery earth into hard stone; set in Thy Church strong and mighty pillars that may suffer and endure great labours, watching, poverty, thirst, hunger, cold and heat; which also shall not fear the threatening of princes, persecution, neither death but always persuade and think with themselves to suffer with a good will, slanders, shame, and all kinds of torments, for the glory and laud of Thy Holy Name. By this manner, good Lord, the truth of Thy Gospel shall be preached throughout all the world.

Therefore, merciful Lord, exercise Thy mercy, show it indeed upon Thy Church.