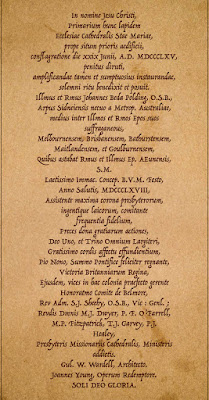 In previous posts on this Blog, we have presented some historic images of the old Cathedral of Saint Mary, commenced in 1821 by Father John Joseph Therry, and which became Archbishop Polding's Cathedral in 1835.  Thirty years later, in 1865, that building was destroyed in a spectacular night time fire, which horrified Catholics and non-Catholics alike.

Only three years later, in 1868, through the generosity of ordinary Catholics and many non-Catholic well-wishers, it was possible to lay the Foundation stone of a new and larger Cathedral.  We celebrate the sesqui-centenary of that Foundation at this time.

The report of that occasion, which appeared in the The Freeman's Journal of 12th December 1868, gave the text - in Latin - of what had been inscribed upon a brass plate, enclosed within the Foundation Stone.  That plate, of course, remains invisible, but we are pleased to present this translation of an inscription unseen for 150 years :

So to begin anew on a grander scale,
with a building more beautiful for the Cathedral Church of Saint Mary,
this, the First Stone,
was blessed and laid in a solemn rite,
near to the location of the previous building,
wholly destroyed in a conflagration on the
29th day of June AD 1865.

On the most joyful Feast of the Immaculate Conception
of the Blessed Virgin Mary,
in the year of Salvation, 1868,
with a great assembly of priests assisting
and a vast number of the lay-faithful gathered,
Prayers and Thanksgiving were given to God,
the Three-in-One, and Giver of all things,
with an outpouring of most loving and heartfelt devotion.

This took place during
the happy reign of Pius IX, Supreme Pontiff,
whilst Victoria was Queen of Britannia
and ruling as her Vice-Regent in this Colony,
The Right Honourable, the Earl of Belmore.

William W Wardell, being the architect,
and John Young, the Clerke of Works.

The brass plate upon which was inscribed the text translated above, was made, of course, in advance of the Foundation Stone ceremony.  The stone refers to the Bishops who were present, but on the day itself, not all the bishops listed as being present, actually were.  Bishops Matthew Quinn and William Lanigan (of Bathurst and Goulburn, respectively) together with Bishop James Murray (of Maitland) and Bishop Pierre Bataillon SM (former Vicar Apostolic of Central Oceania) were the bishops present on the day.

This translation was prepared by Michael Sternbeck, in consultation with Dr David Birch and Father Justin McDonnell. We probably will never know who prepared this piece of Latin prose for the plaque, but he took great care over it. It is replete with abbreviations reminiscent of classical Latin epigraphy and employs a poetic vocabulary.  Nevertheless, it is distinctly ecclesiastical and not untypical of such commemorative plaques. In preparing a translation, rendering the Latin into elegant English prose took precedence over strict grammatical accuracy.

The image above gives the Latin of the inscription precisely as it was laid out in the column of The Freeman's Journal.  It is not an attempt to replicate the appearance of a brass plate.

Next Post : The Freeman's Journal report on the Foundation Stone ceremony, 1868.