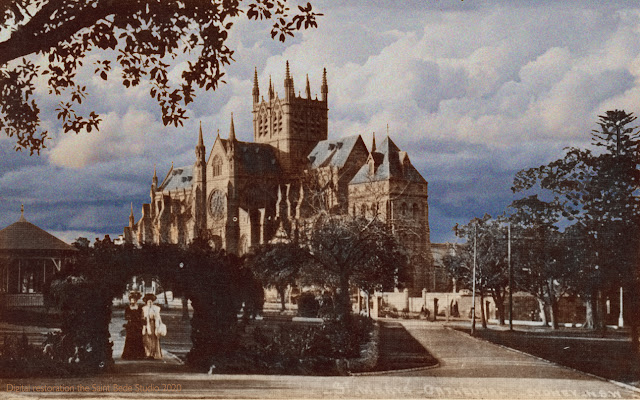 On the left, in Edwardian splendour, two ladies are posing for the photographer within a leafy archway.

At this time, the structure of the Cathedral was only just a little more than half its present length.  Between 1867 and 1900 had been constructed the sacristies, the chancel, the transepts, two bays of the nave and the central tower, known at that time as The Cardinal's Tower in honour of the then Archbishop of Sydney, Patrick Francis Cardinal Moran.

Just right of centre is shewn another, smaller tower.  This is part of the remaining facade of old Saint Mary's Cathedral, (1821 - 1865).  Trees conceal the remainder of this old facade, which was added to the earliest sections of the building from the 1850s.

When work commenced in 1912 on the completion of the present Cathedral, the old 1850s facade was carefully taken down, stone by stone, intended to be re-built elsewhere on the precinct.  But then World War One intervened and the stonework - carefully preserved - disappeared from the site ... it is not known for certain where it went and for what purpose.