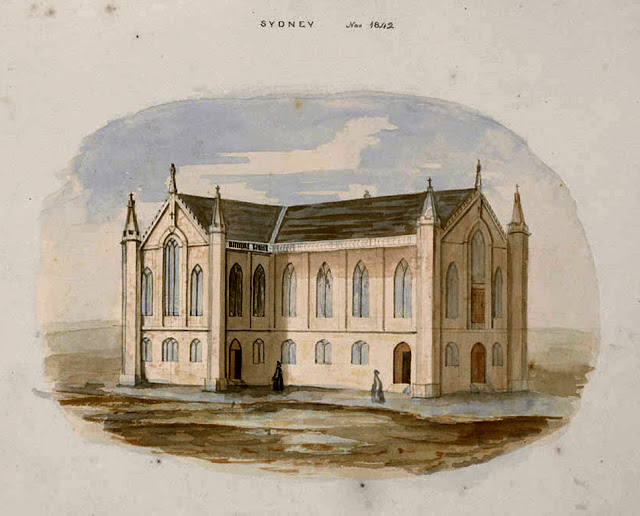 On 29th October, 1821, the Governor of the Colony of New South Wales, Major-General Lachlan Macquarie, laid the first stone of Australia's earliest Catholic Chapel.  This was Saint Mary's church, adjacent to Hyde Park in Sydney.  Not long after its exterior was completed, it became the cathedral of Australia's first bishop, John Bede Polding OSB.

In this bi-centenary year, we will presenting a series of posts detailing the history of that first church and Cathedral, which was tragically destroyed by fire in 1865, just 30 years after its completion.

In this post, we present a watercolour preserved in a sketch book preserved by the State Library of New South Wales.  It depicts old Saint Mary's as it appeared in November 1842.  The drawing was prepared by the famous architect Edmund Thomas Blacket, although we may be excused for doubting that, given the crudeness of the sketch.  Mr Blacket prepared this sketch within days of his arriving in Sydney from England with his family, at the beginning of an illustrious career.

The facade of the old church - which faced Hyde Park - is seen on the right of the drawing.  A lady is seen walking through the Cathedral precinct and within some metres of her, another figure in black, most likely a Benedictine monk.

Unlike the present Cathedral, old Saint Mary's was built from a light-coloured stone, somewhat grey.