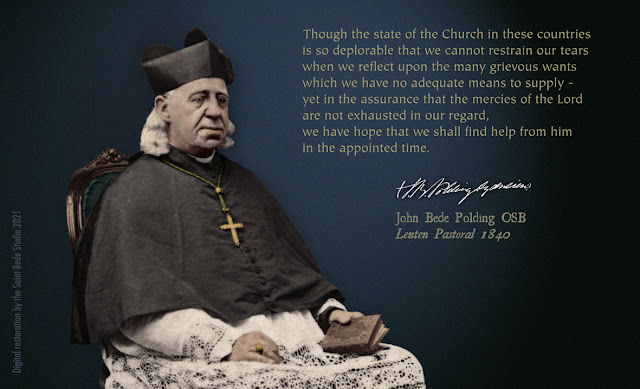 We have sinned, we have committed iniquity, O Lord, against the justice; Let thy wrath and indignation be turned away, I beseech thee.

In this manner did Daniel, the prophet of God, supplicate for his people.  At the commencement of this solemn season of fasting and prayer, we feel ourselves impelled, on behalf of the flock committed to our pastoral charge, thus to invoke the Mercy of God, that he may have pity and spare.

For, dearly beloved in Jesus Christ - though the state of the Church in these countries is so deplorable that we cannot restrain our tears when we reflect upon the many grievous wants which we have no adequate means to supply - yet in the assurance that the mercies of the Lord are not exhausted in our regard, we have hope that we shall find help from him in the appointed time.

Acknowledging, therefore, that we have sinned, that we have committed iniquity, let us humbly and earnestly implore that the wrath and indignation of God may be turned away from us.  And whereas an attachment to sin must ever being displeasing to God, let us most humbly beseech him to move our hearts to sincere repentance.  Whilst we offer our prayers, let us not forget that it is our duty to make use of the means of Grace, purchased for us at the price of the blood of Jesus, and apply to our souls in the Holy Sacraments.  The Church at all times exhorts sinners not to delay their conversion; it is however more especially during the holy season of Lent she entreats them not to neglect the day of salvation; not to reject the opportunity of presenting their supplication with an humble and contrite heart, at a time when they may be certain of a favourable audience at the throne of Grace. Let this assurance - in addition to the powerful motives which urge the sinner no longer to refuse the Merciful Invitation of his God - let this assurance influence you to commence forthwith the business of conversion.

Dearly Beloved, we exhort you not only to renounce the works of the flesh, but also to bring forth fruits worthy of penance.  In bitterness of heart, survey that large period of your life you have passed in neglect of your religious duties.  O, in that vast extent are there not numberless crimes to be atoned for?  With unfeigned humility and compunction bewail your sins; examine what have been the causes of your transgressions; destroy the root whence spring your evil doings, and in all sincerity disclose to the minister of God the miserable state of your souls.  These are the first fruits a penitential spirit will produce - a sincere and humble confession of your sins accompanied by a bitter sorrow for the past and amendment for the future.  To these dispositions and good works must be added other works of penance.  For this reason the holy fast of Lent has been instituted.  Our bodies have been incentives to sin; it is not fitting that they should endure the punishment of sin?  By immoderate indulgence of the appetite, guilt has been contracted; is it not right that the appetite should be restrained?  In the Sacred Scripture, fasting is frequently mentioned as a just and proper means to atone for sin and to satisfy the Divine Justice.

Be ye converted to me, says Almighty God by the prophet Joel, with your whole hearts in fasting, and weeping and mourning…Thus the people of Nineveh fasted and cried to the Lord in their affliction and he heard them. David humbled his soul in fasting in the spirit of penance for his sins.  Our Saviour strongly recommends fasting to us; his Apostles, and the first Christians rigorously fulfilled the recommendation which had the sanction of his example. During the forty days of Lent, they abstained not only from fresh meat, but also from eggs, butter, and fish. They only broke the fast after sunset, and then took for their meal herbs, roots and bread … happy times of Christian fervour, far different from the degenerate age in which we live!

We earnestly exhort all who have attained the age of twenty-one years, to observe the rules of Abstinence and Fasting.  Labourers and hard-working men are allowed the usual number of meals; also those who are in a delicate state of health, who, by reason of weakness of constitution or other cause, require a similar dispensation. …Those who are from a reasonable motive require dispensation either from fast or abstinence, will apply to their pastor, who is empowered to grant every necessary dispensation. Let those who cannot apply to their pastor be careful not to be deluded by the love of indulgence, into a groundless decision in favour of their self-love.

We must do Penance or perish. We pray the Father of Mercies to grant you sincere Repentance, to hear your prayers, and to accept your fast, that, cleansed from all defilement of sin, with pure consciences you may be strengthened by the sacred Body and Blood of his Son unto Eternal Life. The Grace of God be with you. Amen.

The above are excerpts from Bishop John Bede Polding's Pastoral Letter for Lent 1840 as contained in the anthology The Eye of Faith.

It is easy enough to read the letter above as belonging to the religion of a long-gone age.  Perhaps Archbishop Polding's focus on sin and conversion, however, might seem more understandable when we consider the faithless state of the Australian colonies in the year 1840.  Convicts were still being transported to the colonies then and a significant proportion of the population either was convict, former convict or the offspring of convicts.  Ministers of religion were few and they struggled to bring Faith into a vast and mainly godless land.  Only a man of profound Faith, compassion and a burning desire to bring souls to Christ could expect anyone to take notice of the dramatic language of this 1840 Pastoral Letter for Lent.
Archbishop Polding's knowledge of the Scripture was so extensive that he could freely quote from it in his writings, especially from the Old Testament prophets and the Epistles of Saint Paul.
The Eye of Faith was printed by the Lowden Publishing Co., Kilmore Victoria in 1977.  The editors were Gregory Haines, Sister Mary Gregory Foster and Frank Brophy.  Special contribution to the volume were made by Professor Timothy Suttor and James Cardinal Freeman.
AMDG
at 2/18/2021 12:47:00 PM