On the eastern side of Saint Mary's Cathedral, Sydney, and running alongside the chancel is an enclosed area known as The Chapel of the Irish Saints.

Between 1901 and 1946, in a vault beneath the floor of that chapel, rested the remains of several of our pioneering clergy :  Father John Joseph Therry (died 1864); Father Daniel Power (died 1830); Archdeacon John McEncroe (died 1868) and Archbishop John Bede Polding OSB (died 1877).  When these pioneer died, they were buried in various cemeteries around Sydney which have long since ceased to exist.  In 1911, Patrick Francis Cardinal Moran was also laid to rest in this vault.

In the first decade of the twentieth century a new window of stained glass was made by the renowned English firm of Hardman and was installed in the Cathedral in the wall of the Chapel of the Irish Saints.  It is known as The Polding Window. The central depiction of this beautiful window is Pope Saint Gregory the Great sending the monk Augustine to convert the English to Christianity. The designer of the window obviously perceived this as a type of the founding of the Church in Australia.

Several pioneering bishops are depicted in this window, but the most prominent are three Benedictines in glazed roundels along the lower border of the window.  These are Bishop William Bernard Ullathorne OSB, Archbishop Polding and Bishop Charles Henry Davis OSB.  These windows are rendered in the high-style of the Gothic Revival.  The bishops are depicted in mediaeval vestments (including amice apparels) and small, jewel-ornamented mitres.  In the case of Archbishop Polding, he is wearing an oversized pallium and holding a Metropolitan Cross, the symbols of his status as a Metropolitan Archbishop of Sydney.

Never intended to be viewed at close range, these beautiful windows nevertheless are finely-detailed and are good (though stylised) likenesses of the three bishops. It is most likely that the facial details were made from photographs or engravings.

The beautiful photographs which accompany this post were made available to us by Sydney Archdiocesan photographer Giovanni Portelli and are under his copyright.

A section of the Polding Window in Saint Mary's Cathedral Sydney. 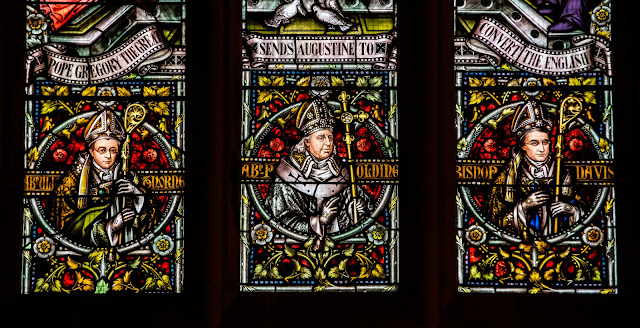